Cornerstones of our success story 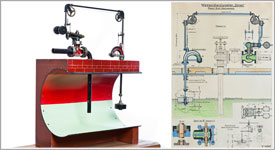 The development of equipment for steam applications started in 1901 with the founding of "Pat. E. Hannemann G.m.b.H." in Berlin. Mr. Emil Hannemann was the inventor of water level regulation for steam boilers.

Milestones in our company history

Division of the company and relocation of the new valves production to Oranienburg.

The design of soft sealing and metallic sealing ball valves for a wide range of applications in the high pressure area, high temperature area and/or in abrasive fluids. The design of ceramic shut-off and control ball valves was further developed.

The design of the TECgate - the metallic sealing gas shut-off valve without oil filling for pressures up to PN100.

The recently patented design of the TECtemp HT L injection cooler for modern combined cycle power plants for applications up to 720 °C. This is a leading technology in the global market in the area of energy generation.

New look for TEC artec. Renovation of the corporate design. Fresh and modern, we are looking into the future with proven many years of experience.

"The force of bundled competence" Three leading companies are cooperating in the area of boiler and process temperature control. TEC artec, Meeraner Dampfkesselbau and MH Power Systems Europe Service have entered a strategic collaboration in the injection cooler area.